Christian Rudi, my 3rd-great-grandfather, was born in Baden-Wurttemburg, Deutschland in 1800.  I’ve not researched the German relations yet, but I know his parents were Johann Christian and Maria Elizabetha.  His father died when Christian was eight years old.  They were, of course, Lutheran.

Around 1822, Grandpa Rudi (sometimes spelled Rudy) married Susanna Elizabetha Walk and they proceeded to start their family:  Susanna, born 1824; Johanna Catherine, born 1825; a daughter who lived only a month in 1829;  Christiane. born 1832; Johann Andrew, born 1830; Caroline Christina, born 1842; Leonard Christian, born 1845.  I was able to find All of their Baptismal records, thank-you Lutherans!

In 1849, Christian, his wife Elizabetha, and five of his six children left Wurrtemberg, traveling to the port city of Havre, France, where they boarded a ship for America, arriving in the Port of New Orleans, Louisiana.  The children on the passenger list of the JH Glidden  are Susanna, 26; Andreas, 18; Christiane, 16; Caroline, 6; Christian, 4.  Christian lists his occupation as Farmer.

In the Harrison County, Indiana of 1850 census the Rudi family has shrunk to Christian and Elizabetha,  Andrew (19 y.o. and working as a farm laborer), Caroline (7), and Christian (5).   Their daughters, Susanna and Christiane had married not too long after they arrived. There is another daughter, Catherine, that was not on the JH Glidden passenger list, who also married in Crawford County 1849, making me think something had been arranged prior to their departure from Baden.  Harrison County had a strong German community going well before the Rudys arrived and in this census he is living on land owned by the Floch family. Flipping backward and forward at the neighbors, I read page after page of German names, all identifying their birthplace as Germany…

Sometime before 1860 the family bought a farm about 15 miles west in Jennings Township, Crawford County, near Leavenworth,Indiana.  From the 1860 census we learn that his real estate is worth $400 and his personal belongings $300.  The only child still at home is Christian, who is 15.  Andreas/Andrew is missing, but he  would have been nearly 30 years old by then, so that’s not unusual. I found Caroline, age 18 in 1860, living in Corydon with her sister, Christiane.  Christiane had married a rich merchant who owned several businesses there in Corydon, which was the largest town in the area; she and her family are an interesting group of collateral relatives.

Along came the Civil War

…The Rudi Family were **Residents of Leavenworth, Indiana, where this happened in 1863, called the Hines Raid:

In June 1863, a 25-year-old Confederate spy from Kentucky, Thomas Hines, was sent by General John Hunt Morgan to ride north into Indiana and reconnoiter with Southern sympathizers there, whose dedication to the Southern cause Morgan drastically overestimated. Hines and his party of nearly a hundred men stole uniforms from a Union supply depot in Brownsville, Kentucky, then robbed a train in Elizabethtown to acquire Union currency. Dressed as Federal troops, they crossed the Ohio River on horseback a few miles downstream from Leavenworth, then struck out for Paoli, pretending to be in pursuit of Union deserters.

In French Lick, they met with the local Copperhead leader, Doctor William A. Bowles, who headed the Confederate-leaning Democratic party in southern Indiana and was a supporter of slavery. Bowles told them he was unable to help them. Indiana Home Guards were then in pursuit of the Confederates. Hines hired a Leavenworth local to guide them to a safe ford over the river where they could escape into Kentucky, but the local was actually a Union supporter and betrayed them.

**Residents of Leavenworth carried ammunition to Union troops, who gunned several of the horsemen down as they tried to get across the river at Little Blue Island. Three Confederate soldiers were killed and a large number were taken prisoner and kept in the Methodist Church in Leavenworth. The spy, Hines, escaped… (from wikipedia)

A couple of weeks later in Corydon, Indiana, where Caroline was living with her sister, Christiane,  and where sisters Catherine and Susanna were raising their families, this was happening:

The Battle of Corydon was a minor engagement that took place July 9, 1863, just south of Corydon, which had been the original capital of Indiana until 1825, and was the county seat of Harrison County. The attack occurred during Morgan’s Raid in the American Civil War as a force of 2,500 cavalry invaded the North in support of the Tullahoma Campaign. It was the only pitched battle of the Civil War that occurred in Indiana, and no battle has occurred within Indiana since.[3]

As news of an impending raid spread across the state, Governor Oliver P. Morton called out the state’s militia force, the Indiana Legion, to defend against the threat. Unaware of the size of the invading army, four companies of the 6th and 8th Regiments of the Legion, totaling about one hundred men, attempted to prevent the Confederates from crossing the Ohio River into Indiana, but were overcome by superior artillery fire, killing two of the defenders. The units retreated northward where they met with the main body of the 6th Regiment under the command of Col. Lewis Jordan. Along with the townspeople, they constructed breastworks that formed a defensive line south of Corydon. Despite promises of reinforcements from regional Legion commanders in New Albany, only about 450 men (consisting almost entirely of locals) were defending the town.

(The “locals” would have included the German community that helped Christian get started in America, as well as the Rudi sons-in-law.  They ended up surrendering the town, giving them all their money and supplies to keep them from burning down the town.)

Although the short battle cost the cavalry twice as many casualties as the outnumbered militia units, the battle resulted in a Confederate victory, which enabled Brig. Gen. John Hunt Morgan to secure supplies and money before continuing his raid through Indiana and into Ohio. The delay, however, proved critical in helping the pursuing Union army overtake and later capture Morgan and his forces……………………………………………………………………….wikipedia

(This was all part of Morgan’s Raid, a series of battles and skirmishes that is movie material. I understand why my dad admired so many Confederate generals) 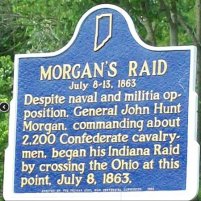 Who was Nicholas Kirsch? Why/how was Caroline, last seen living in Corydon with her sister, in Louisville getting married?    So many questions… Little did I know what a deep, winding rabbit hole I was about to jump in…

My best answer to the first qustion is this:

Nicholas Kirsch, born in Bodendorf, Rheinland, Prussia, arrived in New York City around 1853, according to his naturalization papers. I’ve had a lot of fun searching passenger lists, but no surprise that dates and ages are off.  I think he was only 16 when he arrived in 1854.   Later, he claims to be older, which isn’t too surprising.   What I’m sure of is that he somehow made his way to Louisville, Ky and in 1861 he volunteered for the Kentucky 4th Cavalry Regiment where he served as a bugler. I’m super impressed with the role of Buglers..

Was Nicholas the Bugler the same Nicholas who married in Louisville in 1864?  Back to Civil War Battles, I spent another couple of days studying the role of Louisville, Kentucky during the Civil War.

Louisville in the American Civil War was a major stronghold of Union forces, which kept Kentucky firmly in the Union. It was the center of planning, supplies, recruiting and transportation for numerous campaigns, especially in the Western Theater. By the end of the war, Louisville had not been attacked once, although skirmishes and battles, including the battles of Perryville and Corydon, took place nearby.

That’s just the beginning…Most of those battles that Dad talked about were staged from there; literally Most of my Civil War Veteran ancestors were gathered there at one time or another between 1860 and 1865.  It is fascinating…but I had to focus on the 4th Kentucky Regiment and Private Kirsch.  Eureka!  He was in Louisville from November 9 – December 16, just in time to marry Caroline.

But how did he know Caroline RudI?  He had been in the army since 1861; had they met earlier, antebellum? Probably, so I searched mightily to find him in the 1860 censuses, but if he was in Crawford County or Louisville, I would have found him.  And if he were in Crawford County, why would he have volunteered in the 4th Kentucky?  I found nothing between his arrival and his enlistment. 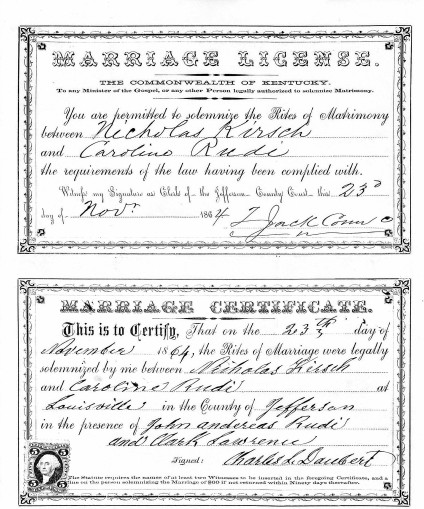 I was So excited to see their marriage license that at first I didn’t notice …  Look at who is the witness to the nuptials:  John Andreas Rudi, Caroline’s brother. Where on earth did he come from?  The goose-chase that ensued involved every member of the Rudy Family and while it was fascinating, it took days…

I can’t find any verifiable record of him except on several family trees who place him in Stephens, Illinois after the war.  He is called John Rudy consistently in the censuses from there and he has the proper birth year (1830), states that he and his parents were born in Germany, and that he served in the 55th Illinois Infantry during the war.  Hours went by as I tried to hook up the 55th Illinois with Louisville, Ky in 1864, but I am stymied.

I hate to admit how much time I have spent trying to figure out how he came to be the witness at his sister’s wedding, especially as I became immersed in the Civil War Battles, Morgan’s Raid, the role of Louisville in the union efforts… Add to that my efforts to answer the question of how Nicholas and Caroline met each other and you have my best explanation for why I haven’t blogged in so long!!!

I pick up the trail of Nicholas and Caroline in Louisville after the war:  Nicholas was assessed $9.17 in the Louisville records of special Taxation in 1865, the price of a license for a 4th class Peddler.  A 4th class Peddler was any person who sold out of a store or market, including a butcher, which is where I find Nicholas working in the 1866 Louisville KY directory.  He stayed at 97 Portland Ave., the heart of the German community known as Butchertown, according to the directories of 1867-1869…(hey, maybe he and Caroline met through her Uncle Leonard Keller’s business??) (make me stop)

Around 1870 Nicholas and Caroline Kirsch and their two sons moved to Jennings Township, Crawford County, Indiana, near Caroline’s family.  The census that year lists Nicholas as a common laborer.  He does not own property yet, probably living on part of the Rudy farm.  Caroline’s parents, Grandma and Grandpa Rudi, are still on their farm too,  along with their youngest son, Christian, his wife, Delila, and their daughter, Mary.

In the 1880 census, the Kirsch family was living in the same place and had expanded to include Fred, born 1870;  Christina, 1874; Peter, 1875; Charles, 1877; and Elizabeth, 1879.  Nicholas Kirsch is working as a stonemason.  There are no questions that census regarding real estate value, but they own the farm.

Same census shows North Goodson is a sawyer, still living on the farm with Catherine and their five children. aged 10 months to 13 years old.

By 1880, the aged Christian and Elizabetha Rudy were living in Corydon with their daughter, Christiana Keller.  Their son, Christian, and his family were living on the old farmstead near Leavenworth, near the Kirsch family.

3rd great-grandmother Elizabetha died shortly after the census; Christian lived until 1885.   What an Adventure they had!  I would be way too lazy to pull up roots and start a new life halfway around the world at age 49, so I’m so impressed with their gumption.

In 1891, great-great grandparents Nicholas and Caroline Kirsch’s daughter, Christina, married great-great-grandparents North and Catherine Goodson’s son, Halleck.  Christina was barely 17 and Halleck was 24.  They had no doubt known each other all of their lives.  They built a place on their family’s property and set about having children.

What does all of this have to do with the Button Factory?  We’re getting there…

One thought on “Rudys and Kirsches and Goodsons, oh, my!”

What are you thinking? Cancel reply

This site uses Akismet to reduce spam. Learn how your comment data is processed.